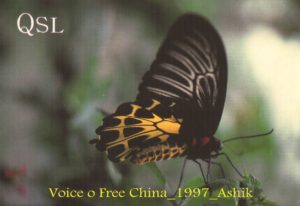 A QSL card is a written confirmation of Radio Communication. It’s either two way radio communication of amateur radio operators or one way reception from AM, FM or SW broadcasting station.  QSL card derivative from the Q code “QSL”.

In the early days of radio broadcasting, it was a pride for the DXer’s received distance signal into the radio set. Who received distance radio signal called DXer.  DXer/Listeners mail “reception reports” to radio broadcasting stations and hopes to get a written letter from a distant station as an official verification that they had heard . As the volume of reception reports increased, stations took to sending post cards containing a brief form that acknowledged reception. Collecting these cards became popular with radio listeners in the 1920s and 1930s. Reception reports used by early broadcasters to gauge the effectiveness of their transmissions.

International shortwave broadcasters have traditionally issued QSL cards to listeners to verify reception of programming, and also as a means of judging the size of their audiences, effective reception distances, and technical performance of their transmitters. QSL cards can also serve as publicity tools for the shortwave broadcaster, and sometimes the cards will include cultural information about the country.

Usually a QSL card will have a picture on one side and the reception data on the other. Most of the broadcasters will use pictures and messages indicating their country’s culture or technological life.