The Karlovy Vary International Film Festival traditionally takes place in early July. However, in the first four years of its existence the festival was held in another town. Tell where. 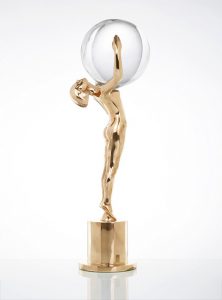 Crystal Globe is the main award of the Karlovy Vary International Film Festival. It was started in the year 1948 after two non-competition festivals. At the same time, it moved permanently to Karlovy Vary.

Karlovy Vary is a town in Bohemia, in the west of Czechia (Czech Republic). It is some called Carlsbad as it’s German name is Karlsbad. The city lies along the Teplá River where it flows into the valley of the Ohře River, 70 miles (113 km) west of Prague.

It is a famous Spa resort, that visit by world famous celebrities. Karlovy Vary is one of the most popular tourist destinations in Czechia.

Mariánské Lázně or Marienbad is another spa town in the Karlovy Vary Region of the Czech Republic. The town, surrounded by green mountains. It is a mosaic of parks and noble houses. Most of its buildings come from the town’s Golden Era in the second half of the 19th century.