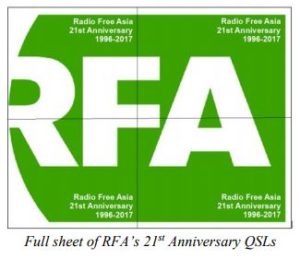 Created by Congress in 1994 and incorporated in 1996, RFA’s first broadcast was in Mandarin on September 29, 1996 at 2100 UTC. This 21 years new QSL card is an unique step to remember the first day of the broadcasting of Mandarin Service.

RFA provides news and commentary specific to each of its target countries, acting as the free press these countries lack. RFA broadcasts only in local languages and dialects, and most of its broadcasts comprise news of specific local interest. RFA A17 schedule may help you to discover RFA more onto you receiver. 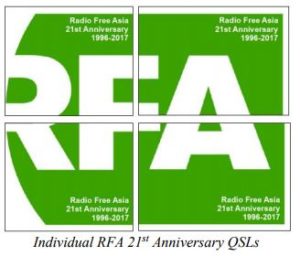 RFA welcomes all reception report submissions at RFA Web  (follow the QSL REPORTS link). Every one including DX’ers and general listening audience can send Reception reports. It also sent by Email at qsl@rfa.org and by traditional mail.