RSI May Quiz: My Slovakia Fifth Round

Radio Slovakia International Disclosed May quiz of My Slovakia Fifth Round.

My Slovakia Fifth Round are focusing on a major problem of Slovakia’s Higher Education System. Statistical data shows a size-able number of people have left Slovakia. Due to demographic crisis Slovakia is facing a brain drain. A significant portion of university-educated youth leaving the country. But good news is, a group of high school students announced that they wanted to live Slovakia. in Slovakia has not seen for a long time that young people stepping into public life. 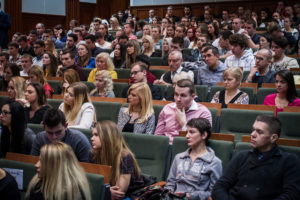 Institute for Financial Policy (IFP), supported by Finance Ministry analyze the brain drain situation over the last 15 years. Analysis shows in that time, about 300,000 people have left Slovakia . It is almost 5 percent of the total Slovak population. Most notable fact is more than half of those leaving under 30 years old that makes a real crisis of a countries demography. In Slovakia health insurance is compulsory. From this register, IFP found that, who leave the country usually de-register with their insurers.

IFP analysts shows that, between 2010 and 2013 more than every tenth full-time student graduating from university left the country. After finishing the university degrees 12-14 percent of graduates leave Slovakia from 2010 to 2013. The biggest group of this leaving are the students of medicine and technical universities are .

Question for My Slovakia Fifth Round is:

What percentage of Slovak university graduates left between 2010 and 2013?

If you want to win a Radio Slovakia International prize, send your answer before the end of May 2013.